My Encounter with a Gerbil Wheel

When I first brought my gerbil home, he was very restless, moving around a lot in his cage and pacing. Concerned when the behaviour didn’t stop and not wanting to let him out of his cage, I looked up some ways to get him some exercise.

It turns out that much like hamsters gerbils like wheels to run in, and as I looked into the world of gerbil wheels found a cool industry that would certainly tire out my gerbil.

While wheels are the same as hamster wheels for visualizing purposes, there is a special set of wheels for gerbils that have no bars or gaps that can prevent the gerbil’s tail from being caught up in the wheel. In addition, gerbil wheels are often smaller than hamster wheels at about seven inches in diameter. 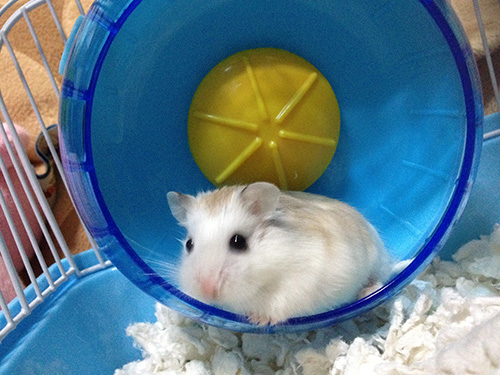 Gerbils also love to run and that love is encoded into their DNA. They often run about five miles in the wild and run mostly at night.

While some wheels are designed to be silent or even sleep-inducing by letting out a soothing background noise, others can squeak and cause disruption especially at night, so be sure to get a wheel that is tailored to your sleeping schedule.

If you’re a light sleeper get a quiet wheel and a heavy sleeper can get a noisy one, but be sure to get the correct wheel ASAP and don’t make the same mistake I did. I couldn’t sleep for an entire night and that lack of sleep bugged me for the rest of the week!

Wheels and other toys

Gerbils either get attached to a wheel when they are young or by seeing other gerbils running in their own wheels. By wiring the wheel to the top of the tank, the gerbil can jump into the wheel and move around, before it starts to run.

I also found other toys for gerbils if they never get attached to the wheel, and while some are commercially made some home improvements include a branch or log to climb on, a dust bath, specialized hay, PVC pipe, and cardboard for them to chew up.

So when I was armed with this knowledge, I moved to get my restless gerbil a wheel. Despite the one sleepless night, I found out that the wheel was the best decision I could ever make for my pet.

I bought him a specialized gerbil wheel that was the fruit of my research and then tossed in a few cardboard pieces and a small log just in case.

After a few adorable tries, he managed to get inside his wheel and began running like crazy. Once he got out, then the pacing and restless behaviour stopped and everything went well from then on. He slept during the day and ran marathons at night, and he seems to be a much happier gerbil!

I wonder if there’s a gerbil Olympics somewhere, maybe we could put this training to good use!

Ever since I was young, I’ve had an admiration and craze for gerbils. Owning one was a dream. Thanks to my parents, I was able to fulfill that dream at a young age and since then have owned dozens of gerbils!

Although many would say otherwise, I have found raising gerbils and looking after them to be quite tough. Here on this blog, I’ll share what I know about keeping gerbils as pets – and hopefully it helps you! If you have any questions just send me a message!